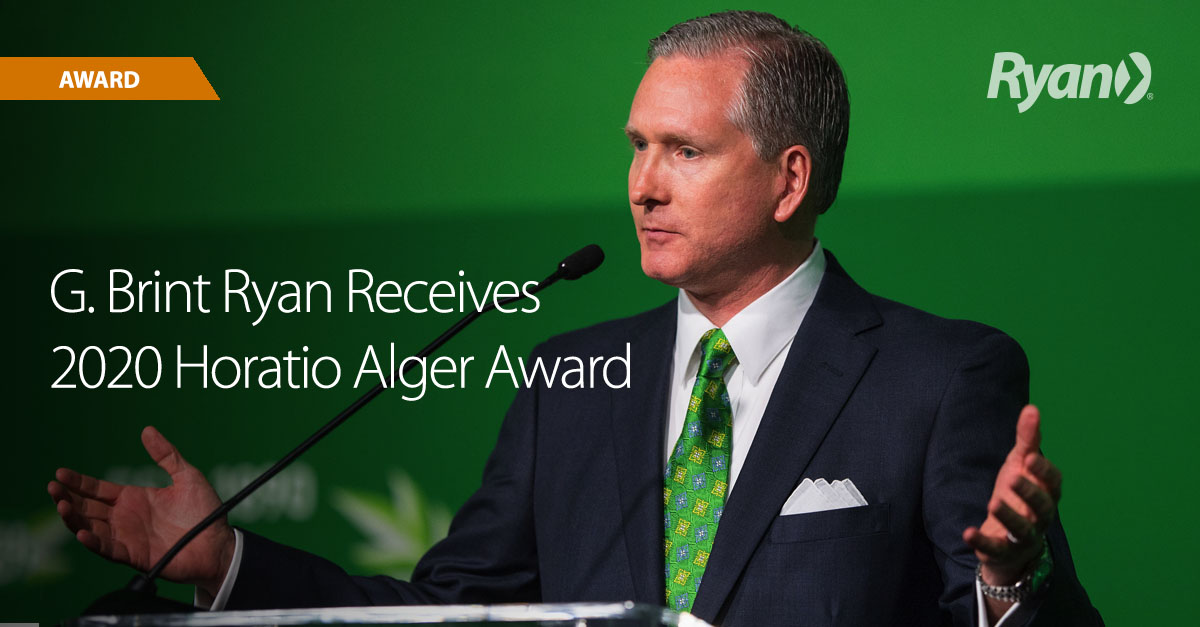 WASHINGTON, D.C. (December 10, 2019) Horatio Alger Association of Distinguished Americans, Inc., a nonprofit educational organization honoring the achievements of outstanding individuals and encouraging youth to pursue their dreams through higher education, today announced that G. Brint Ryan, founder, chairman, and CEO of Ryan, LLC, has been selected for membership in this prestigious organization. Mr. Ryan joins 13 other exceptional business, civic, and cultural leaders from across North America in receiving 2020 honors. For more than 70 years, the Horatio Alger Award has been annually bestowed upon esteemed individuals who have succeeded despite facing adversities and who have remained committed to higher education and charitable efforts in their communities.

From humble beginnings, Mr. Ryan battled adversity through much of his early life. His parents met in high school and eloped shortly after in Mexico to avoid age legalities in the United States. As a boy, Mr. Ryan grew up on a farm outside of Big Spring, Texas where finances were tight because of his father’s meager earnings at a gas processing plant. His mother sold insurance to help keep the family afloat. Throughout his upbringing, his parents struggled with alcohol, and they ultimately divorced. Tragically, his mother was killed in an alcohol-related automobile accident while still very young. Although his adolescent years were often chaotic, Mr. Ryan was a diligent student and worked a number of jobs. His first job was a newspaper carrier. He later helped pay his way through college by bagging groceries at a Piggly Wiggly supermarket. He attended the University of North Texas for both undergraduate and graduate school, majoring in accounting.

After earning his master’s degree, Mr. Ryan joined the accounting firm Coopers & Lybrand. Shortly thereafter, he left the firm with his then boss and started a new firm, specializing in state and local taxes. At just 29 years old, Mr. Ryan and two employees scraped together $250,000 to buy out his partner. This ultimately led to the founding of Ryan, LLC, which is now one of the largest and fastest-growing global tax services firms. The company has been recognized multiple times on FORTUNE’s 100 Best Companies to Work For® list.

“G. Brint Ryan is an individual who, at a young age, was forced to pick himself up by his bootstraps and fight for the life he wanted,” said Terrence J. Giroux, executive director, Horatio Alger Association. “He battled through seemingly insurmountable obstacles by focusing on his education and forming close relationships with professional mentors. As a Member, we are certain he will positively impact our Scholars, and we are delighted to welcome him as part of the Class of 2020.”

Mr. Ryan and his wife, Amanda Sutton, were married in 1996.  They have five children, all girls, ranging in age from 20 years down to 12. A generous philanthropist, Mr. Ryan, and his wife, Amanda, created The Ryan Foundation, which has provided more than $3 million and countless hours of volunteer support to renowned national charities such as Habitat for Humanity, American Cancer Society, American Red Cross, Special Olympics, Make-A-Wish Foundation, and many more. Mr. and Mrs. Ryan have personally donated more than $50 million to causes and organizations near to their hearts, including a recent donation of $30 million to the business school at Mr. Ryan’s alma mater, the University of North Texas, naming the G. Brint Ryan College of Business. Mr. Ryan also serves on the boards for the Caring for Children Foundation of Texas and Communities in Schools – Dallas.

“To be inducted into the Horatio Alger Association is unlike becoming a part of any other organization,” said Mr. Ryan. “It’s special because this recognizes people who have overcome adversity to achieve the American Dream. I have faced my share of challenges, so I understand how important reliable guidance can be for young people dealing with difficult and oftentimes unfair circumstances that are out of their control. I hope I can be a source of strength to them and look forward to supporting them on their own journeys.”

Thanks to the generosity of its Members, the Association awards need-based scholarships to outstanding high school students who are committed to pursuing higher education and giving back to their communities. The Association also educates young people about the limitless opportunities afforded to them by the free-enterprise system through hard work, honesty, and determination. Like Association Members, Horatio Alger Scholars have faced significant adversities but have also displayed unmatched resilience in overcoming their challenges. Since the scholarship program was established in 1984, the Horatio Alger Association has provided more than $180 million to 27,000 students in need, all of which has been funded solely through the generosity of Association Members and friends.

Mr. Ryan and the Member Class of 2020 will be formally inducted into the Association on April 2–4, 2020, during the Association’s 73rd Horatio Alger Award Induction Ceremonies in Washington, D.C. The annual three-day event honors the achievements of both Members and National Scholars, affording both groups the opportunity to meet and interact as well as exchange stories of hardships and triumphs.

Ryan, an award-winning global tax services and software provider, is the largest Firm in the world dedicated exclusively to business taxes. The Firm provides an integrated suite of federal, provincial, and international tax services on a multijurisdictional basis, including tax recovery, consulting, advocacy, compliance, and technology services. Ryan is an eight-time recipient of the International Service Excellence Award from the Customer Service Institute of America (CSIA) for its commitment to world-class client service. Empowered by the dynamic myRyan work environment, which is widely recognized as the most innovative in the tax services industry, Ryan’s multidisciplinary team of more than 2,800 professionals and associates serves over 16,000 clients in more than 50 countries, including many of the world’s most prominent Global 5000 companies. More information about Ryan can be found at ryan.com/canada. “Ryan” and “Firm” refer to the global organizational network and may refer to one or more of the member firms of Ryan International, each of which is a separate legal entity.