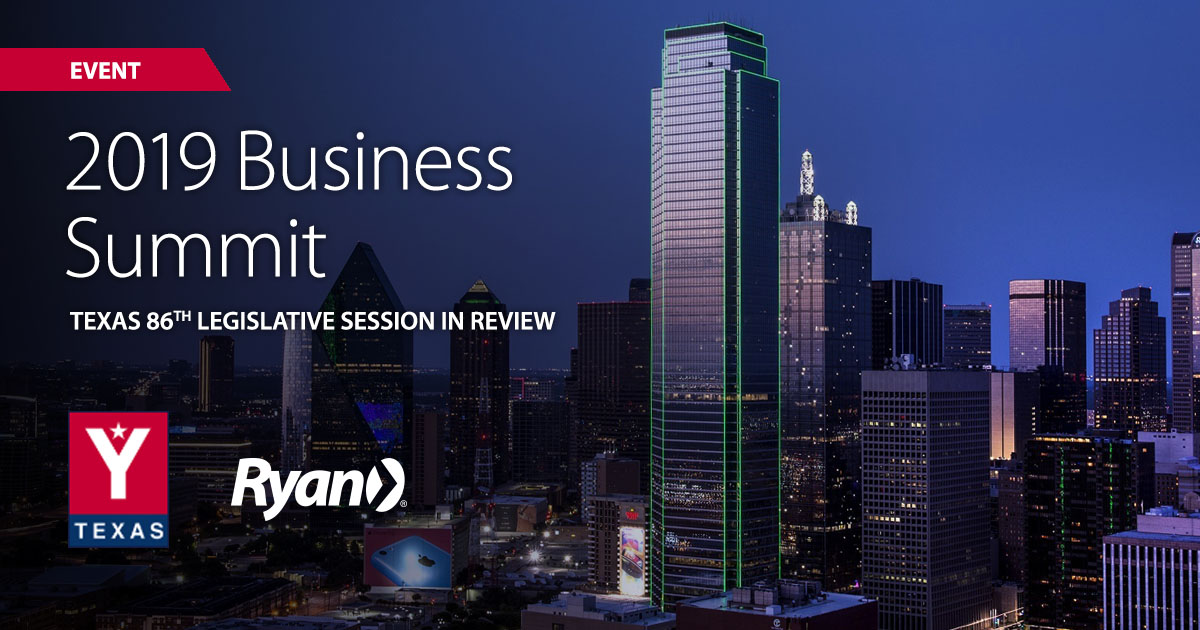 DALLAS and AUSTIN, Texas (Sept. 16, 2019) – On September 27, YTexas will debut its first-ever statewide business summit in Dallas, featuring Texas business leaders and top influencers who will discuss and share insights on the 86th Legislative Session and future of Texas. Moderated by Ryan Chairman and CEO G. Brint Ryan, the panelists will address new legislation, its implications, and specifically what business leaders in Texas need to know about current tax regulations, infrastructure, and workforce development.

Three key bills will be addressed in the panel discussion:

“The Summit was created to bridge the regional divide and open lines of communication among the business community throughout Texas,” said YTexas Chief Executive Officer Ed Curtis. “With the number of new businesses entering Texas, and the subsequent growth each region is experiencing, we saw the need to create an event that both educates with a mix of quality content and inspiring speakers and connects attendees with companies that are making an impact in Texas. We are excited to launch this event with the support of Ryan.”

Mr. Curtis and Mr. Ryan both agree on the summit’s importance because of the rapid influx of corporate headquarters relocating to Texas and the potential obstacles those business owners will face.

“For current Texas companies, as well as companies that are considering relocating to Texas, there are complexities associated with property tax reform,” said Mr. Ryan. “I look forward to having a meaningful discussion on issues that are central to business in the major regions of Texas.”

The YTexas Summit, sponsored by Ryan, is a public event, which will be held at the Ritz-Carlton Dallas from 9 a.m. to 1 p.m., with the panel discussion from 10:30–11:30 a.m. To register, visit ytexas.com/summit.

YTexas is an elite Texas business network that connects, supports, and promotes companies that are relocating, expanding, and growing in the Lone Star State. The organization manages a

state-wide network of stakeholders who exchange information and foster long-term, mutually beneficial relationships that help culturally integrate companies entering Texas. Headquartered in Dallas and Austin, YTexas has received national acclaim for being at the forefront of economic development trends through such publications as the Fox Business Channel, CNN Money, and several Texas business journals. For additional information and corporate resources, please visit www.ytexas.com

Ryan, an award-winning global tax services and software provider, is the largest Firm in the world dedicated exclusively to business taxes. The Firm provides an integrated suite of international tax services on a multijurisdictional basis, including tax recovery, consulting, advocacy, compliance, and technology services. Ryan is an eight-time recipient of the International Service Excellence Award from the Customer Service Institute of America (CSIA) for its commitment to world-class client service. Empowered by the dynamic myRyan work environment, which is widely recognised as the most innovative in the tax services industry, Ryan’s multidisciplinary team of more than 2,800 professionals and associates serves over 16,000 clients in more than 50 countries, including many of the world’s most prominent Global 5000 companies. More information about Ryan can be found at ryan.com/europe. “Ryan” and “Firm” refer to the global organisational network and may refer to one or more of the member firms of Ryan International, each of which is a separate legal entity.