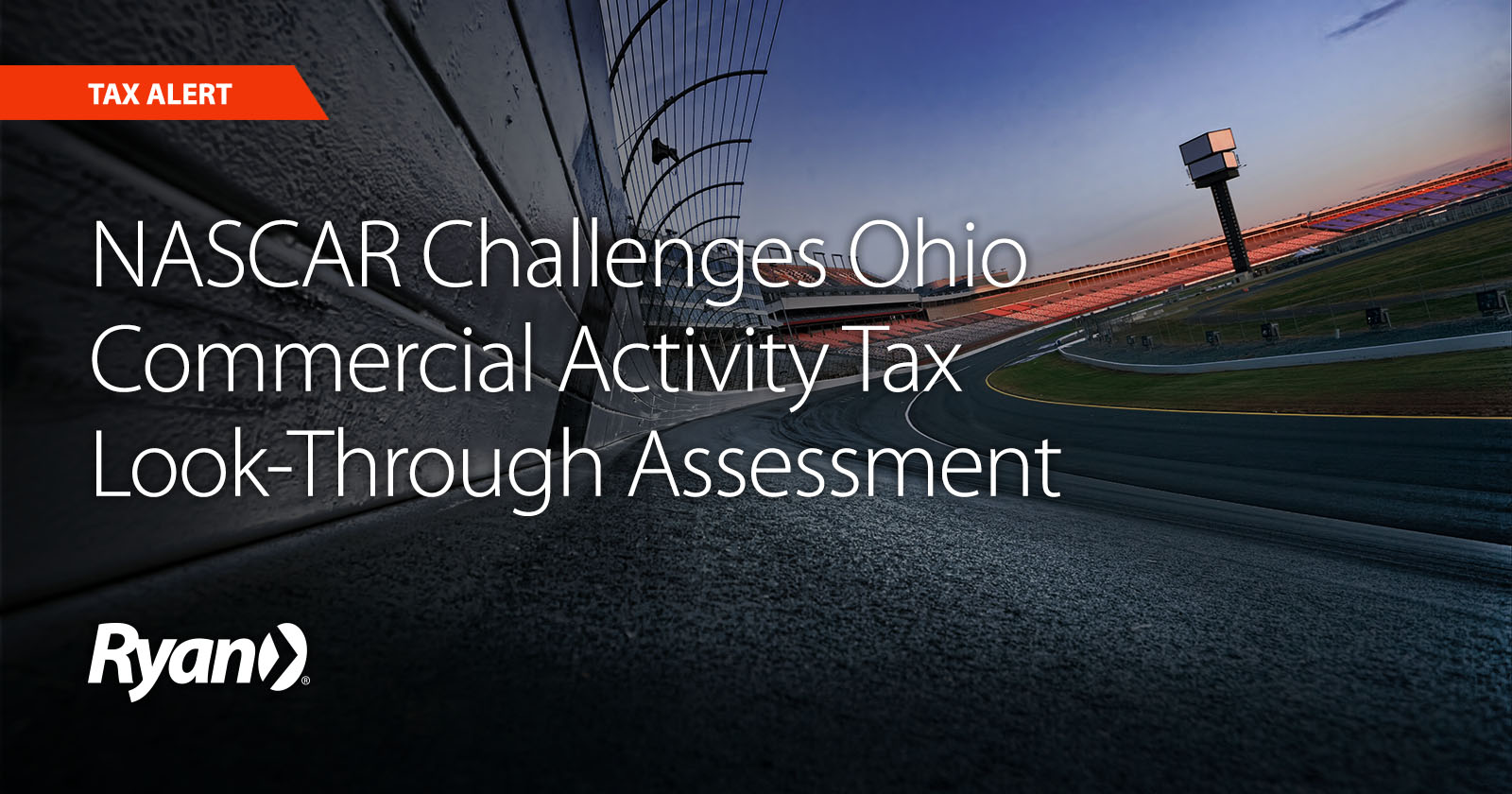 The Ohio Supreme Court will consider the issue of taxing receipts from licensing intellectual property earned by third parties. The Ohio Board of Tax Appeals (BTA) addressed the issue of whether a company not located in Ohio, which licenses its intellectual property to other out-of-state companies that use the property rights to generate revenue in Ohio, is subject to the state’s Commercial Activity Tax (CAT).1 NASCAR Holdings Inc. (“NASCAR”) is a Florida company that sells broadcast rights to auto races it conducts across the country. These broadcast rights are sold to third parties, such as Fox Broadcasting Company (“FOX”), for a one-time flat rate. FOX then sells the broadcast to third parties such as cable and satellite television providers. Approximately 67% of NASCAR’s revenue at issue was comprised of these broadcast rights.

In 2012, the Ohio Department of Taxation notified NASCAR that it was conducting an audit of the company for the period of July 2005 through December 2010. NASCAR maintained that it did not conduct any revenue-producing activity in Ohio, other than presenting seven races in Ohio in its lower-tier competition levels. NASCAR noted that it sold the broadcasting rights to its races to New York-based FOX and licensed Georgia-based Turner to operate the nascar.com website. Merchandise using NASCAR trademarks and logos was sold by a Maryland company that was licensed to produce and sell branded merchandise.

NASCAR maintained that the department’s position of situsing broadcast revenue under R.C. 5751.033(I) was incorrect, as this section only applied to services. The department agreed with this position that R.C. 5751.033(F) was more applicable. NASCAR responded that the department ignored a key provision of R.C. 5751.033(F), which states that when a buyer purchases intellectual property, CAT is based on receipts “to the extent the receipts are based on the right to use the property in this state.” NASCAR argued that the term “based on” implies additional revenues generated by the use of its broadcasting rights. It argued that the company received a flat fee from FOX that wasn’t “based on” whether races were broadcasted in Ohio. Fox and the television stations that broadcasted the races in Ohio may have earned additional money “based on” how popular the races were, but NASCAR was not paid on that basis. As it received no benefit based on how its intellectual property was used in Ohio, it owed no CAT for the sale of the rights, according to NASCAR.

The tax department switched its position to then maintain that R.C. 5751.033(F) was the underlying statute to support their position that the broadcasting rights and use of NASCAR trademarks by the license recipients constituted commercial activity. Using calculations of the NASCAR fan base in Ohio and potential audience size, the department determined NASCAR owed about $328,000 in CAT for the five-year period and about $56,000 in interest. With additional penalties imposed, the total assessment was $549,520.

Oral arguments were heard by the Ohio Supreme Court on January 25, 2022, in the continuing case.2 The three major issues involved concern the situsing of receipts under the CAT statutes. The first issue is whether the BTA should have allowed the commissioner to change the basis for the assessment. The second issue is whether broadcast revenue receipts and merchandise revenue were correctly sourced to Ohio for purposes of the CAT. Finally, there are constitutional issues regarding substantial nexus tests presented in Complete Auto,3 under which NASCAR maintains that the commissioner’s position in this case violates all four factors.

It is anticipated that the constitutional issues of the case will not be considered by the court because of the strength of the statutory and procedural issues involved. NASCAR’s position is that the BTA should not have been allowed to change the basis of its assessment and should have vacated the final determination and remanded it for a new assessment. In addition, NASCAR argues that BTA created a unique interpretation of the sourcing statute and applied it retroactively to subject receipts to the CAT that were not based on use within the state.

The expansion of the application of the CAT to revenue created by residents who only view broadcasted materials would have far-reaching implications. We will keep you updated as this case progresses.