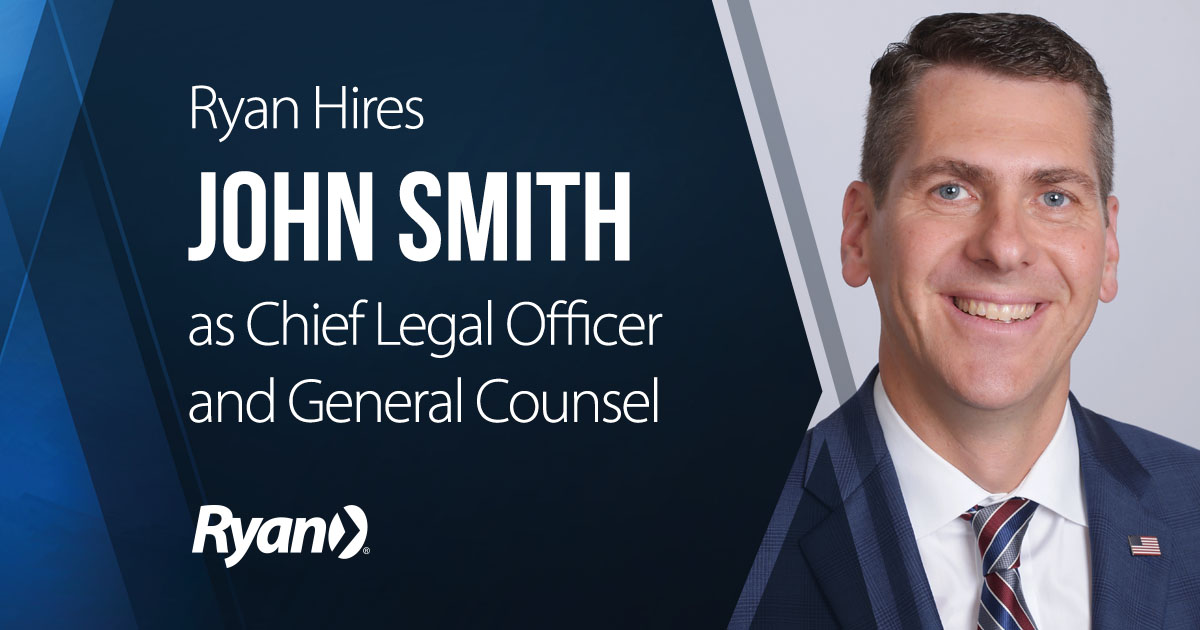 DALLAS (Sept. 20, 2021) – Ryan, a leading global tax services and software provider, announced that John Moroz Smith has recently joined the Firm as Senior Vice President, Chief Legal Officer and General Counsel, based in the Dallas office. Mr. Smith brings more than 20 years of experience as a proven leader in the legal, business, and national security communities as well as in all three branches of the United States government.

“John brings an impressive background and knowledge base that we are certain will be an integral part of Ryan’s success for years to come,” said Ryan Global President and Chief Operating Officer Ginny B. Kissling. “This hiring is important, now more than ever, as we focus on our continued global expansion and reimagine how our Legal department can bring greater value and collaboration to service delivery, technology, and our clients.”

Prior to joining Ryan, Mr. Smith spent 12 years in Texas and Virginia at Raytheon Technologies, an American multinational aerospace and defense corporation. He pioneered roles as the company’s first cybersecurity lawyer and first privacy lawyer. During the last seven years, as a divisional vice president and general counsel, Mr. Smith led the legal departments of the two Raytheon divisions focused primarily on services.

Before Raytheon, Mr. Smith served as associate counsel to U.S. President George W. Bush and the lead lawyer for the White House Homeland Security Council staff. He began his legal career by clerking for Judge Samuel Alito, a few years before Alito’s elevation to the U.S. Supreme Court, and then by practicing at the international law firm of Covington & Burling.

Mr. Smith served a decade as a U.S. Army reservist and two years as a missionary in Ukraine and Russia, shortly after the collapse of Soviet communism. He graduated with high honors from both Princeton University and Brigham Young University Law School.

Ryan, an award-winning global tax services and software provider, is the largest Firm in the world dedicated exclusively to business taxes. With global headquarters in Dallas, Texas, the Firm provides an integrated suite of federal, state, local, and international tax services on a multijurisdictional basis, including tax recovery, consulting, advocacy, compliance, and technology services. Ryan is a 10-time recipient of the International Service Excellence Award from the Customer Service Institute of America (CSIA) for its commitment to world-class client service. Empowered by the dynamic myRyan work environment, which is widely recognized as the most innovative in the tax services industry, Ryan’s multidisciplinary team of more than 3,600 professionals and associates serves over 20,000 clients in more than 60 countries, including many of the world’s most prominent Global 5000 companies. More information about Ryan can be found at ryan.com. “Ryan” and “Firm” refer to the global organizational network and may refer to one or more of the member firms of Ryan International, each of which is a separate legal entity.