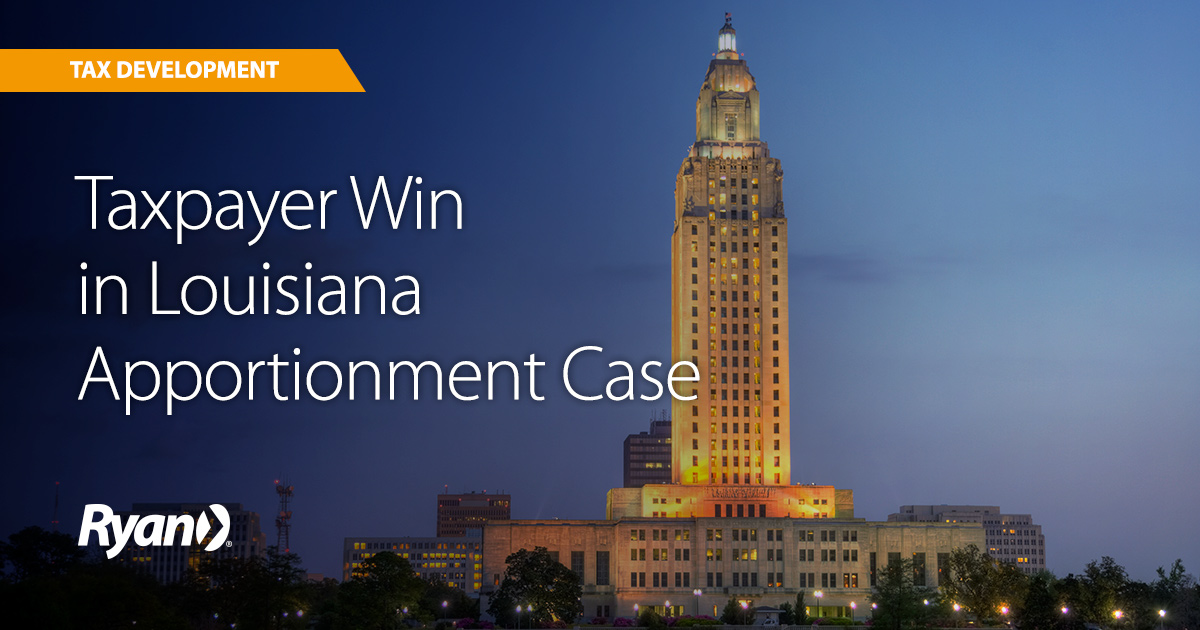 The Louisiana Department of Revenue (DOR) was overruled on appeal in determining that the gain from the sale of a limited liability corporation (LLC) interest was properly includible in the apportionment factor of an out-of-state taxpayer. Davis-Lynch Holding Company, Inc. (“Davis-Lynch”) is a Texas corporation and the sole member in a Texas LLC, Davis-Lynch, LLC. The LLC manufactures float and cementing equipment and operates a warehouse in Louisiana to sell its products to businesses drilling oil wells in Louisiana and in the Gulf of Mexico. In 2011, Davis-Lynch sold its entire interest in the LLC and included the resulting gain on the sale as apportionable income, under La. R.S. 47:287.92 (C).

Upon audit, the DOR increased the apportionment percentage when it excluded the gain on the sale from the revenue ratio entirely, pursuant to Louisiana Administrative Code, Title 61, pt. 1, § 1134(D), as it consisted of sales not made in the regular course of business. Davis-Lynch filed a Petition for Redetermination with the Louisiana Board of Tax Appeals, alleging that the regulation section cited by the DOR exceeded the scope of the relevant taxing statute and is void and unenforceable. The Board of Tax Appeals agreed with the taxpayer, stating that the clear meaning of the statute requires that “other gross apportionable income” be included in the ratio, as all items of gross income are either “allocable” or “apportionable.” The Board’s interpretation of the statute would impermissibly render the phrase “other gross apportionable income” meaningless, a result clearly not contemplated by the statute.

The DOR appealed this finding to the Louisiana First Circuit Court of Appeals, which agreed with the taxpayer, finding that the DOR had relied on a regulation that impermissibly extended the scope of the statute, which clearly is considered the superior source of law in the state. The court pointed out that tax statutes “are to be interpreted liberally in favor of the taxpayer and against the taxing authority.”

The takeaway from this taxpayer victory is don’t always accept the DOR’s interpretation of a statute as the correct reading of the statute. If the DOR’s position appears to conflict with a statute, or legislative intent of the statute, things deserve a closer look. The professionals at Ryan are here to assist taxpayers with reviewing a DOR’s interpretation of a statute as promulgated in a regulation.

The material presented in this communication is intended to provide general information only and should solely be seen as broad guidance and not directed to the particular facts or circumstances of any individual who may read this publication. No liability is accepted for acts or omissions taken in reliance upon the content of this piece. Before taking (or not taking) any action, readers should seek professional advice specific to their situation from Ryan, LLC or other tax professionals. For additional information about this topic, please contact us at info@ryan.com